Shipping to some countries is currently not available, I´m sorry.
To check kindly put required items into cart, follow checkout and you´ll see if your country is available for shipping. 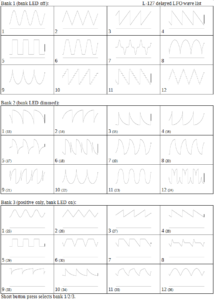 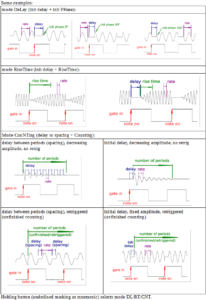 The L-127 is an LFO with advanced trigger synchronization and delay options. The LFO rate is set by a knob or CV input. If a patch cord is plugged into the CV jack, the knob becomes an attenuator for the CV. The Rate LED blinks on and off for rates above approx. 1Hz, and fades on and off for rates under 1Hz.

There are three banks of waveshapes (1-2-3), switched by short press of mode button (LED off/dimmed/on = bank 1/2/3). Each bank contains 12 waveshapes (= 36 waveshapes total). The waves in the last bank (LED on) are unipolar (positive voltages only). Mode and bank is memorized.

There are three modes of operation: Delayed (DL; also known as Initial Phase), Rise Time (RT), and Counting (C). The mode is switched with a long press of the Mode button. The PHase/RiseTime/Count knob operates differently depending on the selected mode:

INITIAL PHASE: An incoming gate or trigger causes the LFO to immediately jump to zero (normally 0V output; may be set with an internal trimmer), and it stays at zero for the time set by Delay (maximum delay = 8 seconds). After the Delay period, the LFO starts playing back the chosen waveform, with an initial phase (position in the wave) set by the PH knob.

RISE TIME: An incoming gate or trigger causes the LFO to immediately jump to zero, and it stays at zero for the time set by Delay (maximum delay = 8 seconds). After the Delay period, the LFO’s output rises in level at a rate set by the RT knob (maximum rise time = 8 seconds) until it reaches full amplitude.

COUNTING: In this mode, the L-127 works as a one-shot transient or modulation generator, rather than as a normal LFO.  Middle and bottom jumpers on the back of the PCB determine how this mode behaves.

The bottom jumper sets whether all of the wave cycles above are played at maximum amplitude (jumper set), resulting in a “burst” effect, or if their level decays exponentially over time (jumper removed), resulting in a “decaying echo” effect (works in Counting mode only).

The top jumper sets the re-triggering mode in all operation modes. If the jumper header is set, a new gate or trigger interrupts the counting for the delay/rising/cycles, and the L-127 starts over again. (Note that if new trigger arrives before the Delay period is finished, there will be no output.) If the top jumper is removed, the gate/trigger input is ignored while the L-127 is playing back the requested pattern of wave cycles. When the pattern is finished, the next gate or trigger will start a new pattern.