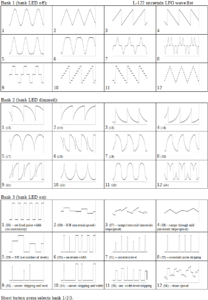 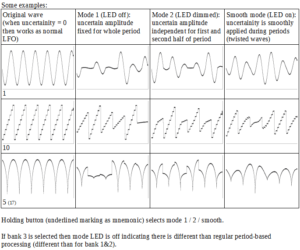 The L-122 is an LFO with “uncertain amplitude” capability. The LFO rate is set by a knob or CV input. If a patch cord is plugged into the CV jack, the knob becomes an attenuator for the CV. The Rate LED blinks on and off for rates above approx. 1Hz, and fades on and off for rates under 1Hz.

There are three modes of operation. The mode is switched with a long press of the Mode button. The wave’s amplitude is then generated randomly depending on the Uncertainty knob setting and selected mode:

1: The waveform’s amplitude is constant for each the entire cycle or period
2: The first half and second half of a wave’s cycle has a constant amplitude. A different amplitude is generated to be used for the first and for the second half of the wave’s cycle, based on time (period). If the selected wave is symmetrical (i.e. it passes through zero half way through its cycle), the positive and negative parts will have different amplitudes. If wave selected is not symmetrical, then the final wave shape may have a discontinuous jump in the middle of the wave’s cycle.
SMOOTH: The amplitude changes smoothly between its current level and the randomly-generated amplitude for the next half-cycle. This means there are no discontinuous jumps in the wave shape during the cycle, aside from those in the original wave itself. This results in interesting distortions in the wave’s shape, such as bending a normally straight sawtooth shape as the amplitude changes.

If the Uncertainty knob is in its minimum position (full CCW), the L-122 works like a normal LFO, producing steady waveshapes (see the waveshape listing above). Turning the knob CW or increasing the modulation CV increases the deviations from the wave’s normal amplitude, making some portions of the wave lower in amplitude.

If bank 3 is selected, the Mode LED turns off, because uncertainity for bank 3 is different: It is based on pulse widths, differing chaos parameters, and isolated levels or steepness. This Mode for the previous banks is stored, so that when the Bank is switched back to 1 or 2, the previously-selected Mode (1/2/smooth) will be recalled. Mode and bank is memorized,