Two inputs (named X and Y like axes but can be used for any two CV or audio  signals, not for J-010 Joystick only).

This splitting allows two functions control by one axis, one for positive joystick movement and second for negative movement, on both outputs from 0V to positive voltage.
This can be used for any input voltage (for example splitting sine to two ouptuts=two half-waves, both outputs positive)
Picture helps (I hope) 🙂 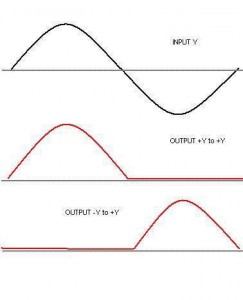 For thoughtfuls:
If you´ll feed an input signal into Y input (forget joystick, just an signal for example sine), you can feed output form an “Y to Y” to X input.
You´ll get these waves (if use +Y to +Y output to X input):
X+Y output: doubled first halfwave (positive) and second (negative) halfwave same as input
X-Y out: first halfwave zero, second halwave negative
and other sums and subtractions for next outputs – some kind of waveshaper as bonus…

Double check power connection before powering your system please.
“Red strip” means -12V connector side in Eurorack standards.
In some power distribution systems connector key can be reverted.
In this case cut connector key and plug power connector right way (with respect to red strip) or use different power cable appropriate to your power system.